2,000 royals, world leaders, VIPs and hundreds of members of the public were at Abbey for state funeral

The King, his siblings, children and other royals marched solemnly behind the coffin from Parliament

Mourners slept in tents, camping chairs and in the middle of the floor as they refused to miss state occasion

The Queen's funeral: All the latest Royal Family news and coverage 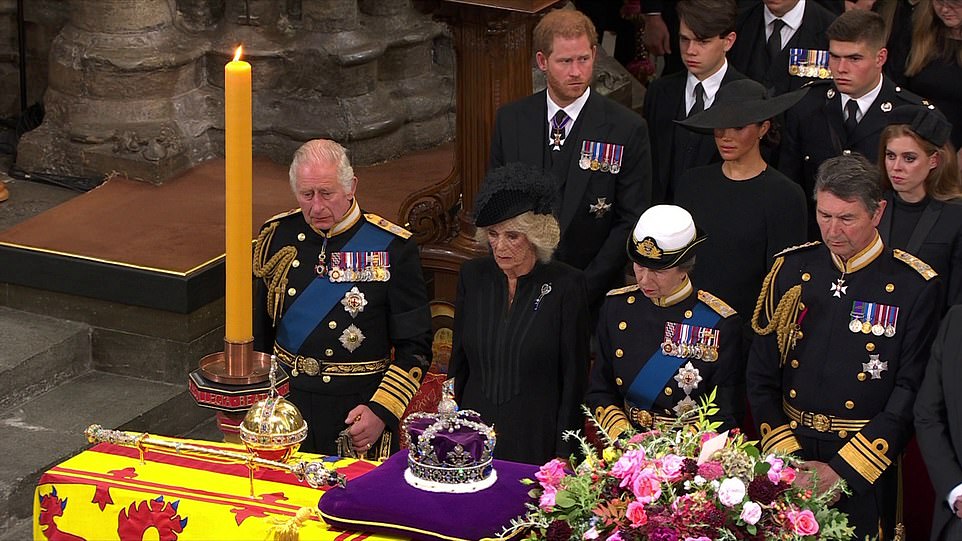 A tearful King Charles III and his grief-stricken family surrounded the Queen's coffin at her state funeral in Westminster Abbey in a moving and majestic farewell to the late monarch today in an extraordinary service followed by a national two minute's silence and the Last Post. 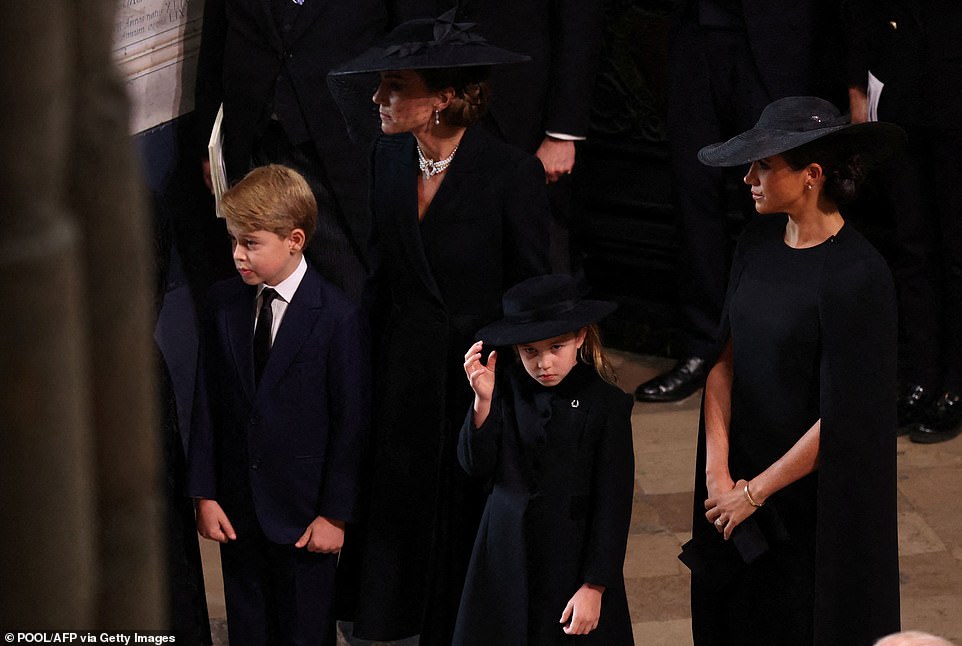 Her Majesty made her final and saddest journey from Westminster Hall to the church where she married and was crowned as Britain mourned its longest-serving monarch and the royals bade goodbye to a beloved mother, grandmother and great-grandmother. 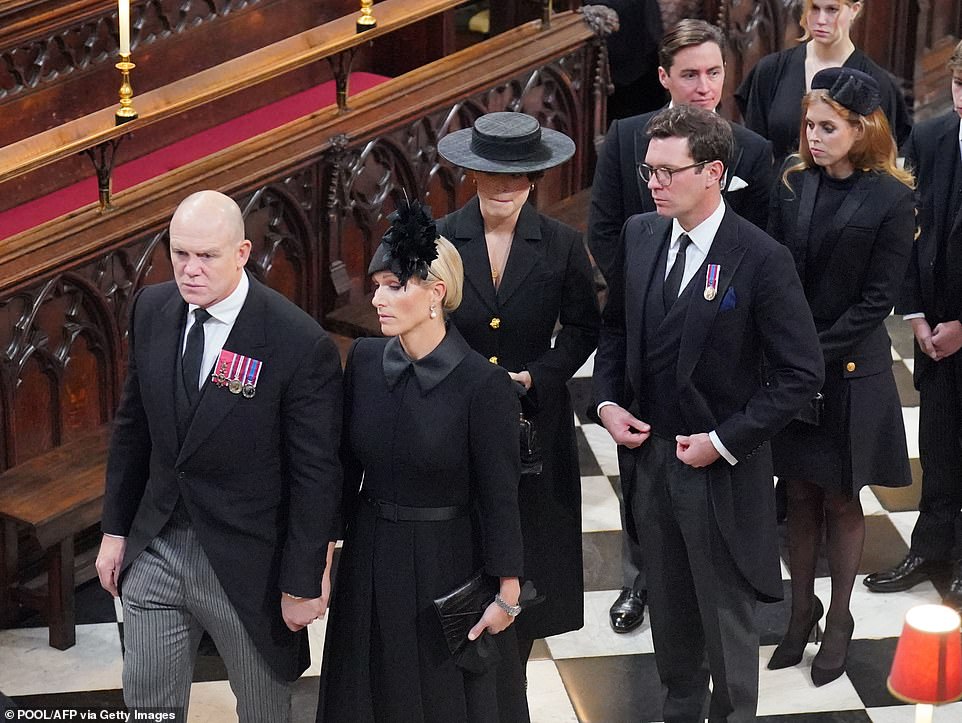 Her coffin was placed close to the altar with her crown, orb and sceptre on its top surrounded by flowers chosen by the King from gardens she loved.  A card in the flowers on top of the coffin read simply: "In loving and devoted memory. Charles R." 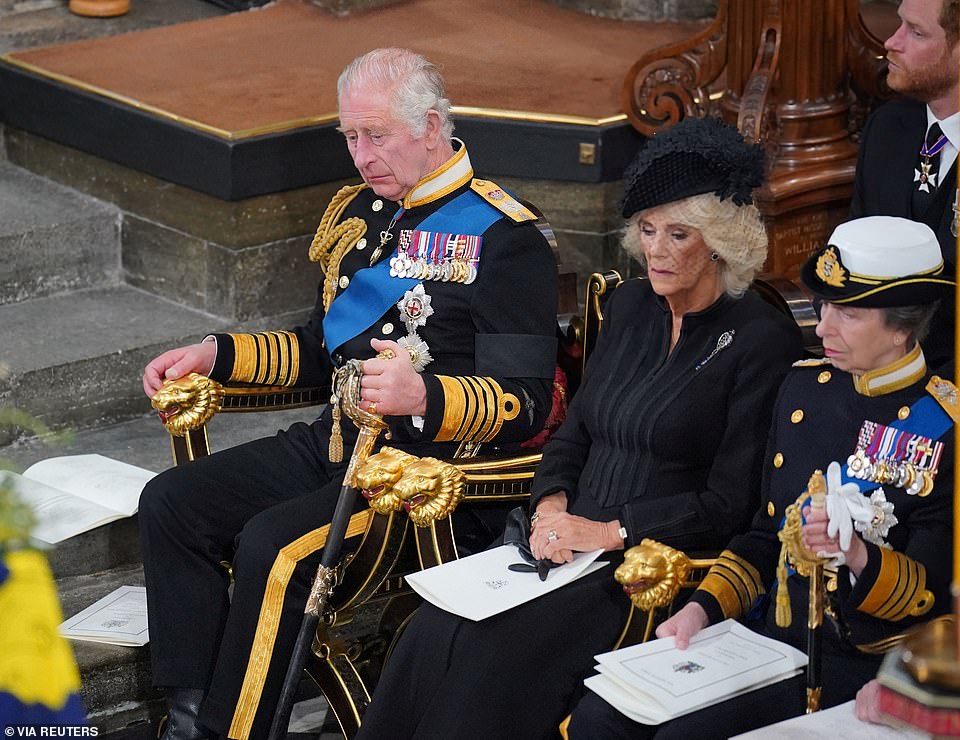 The Archbishop of Canterbury hailed the Queen's 'abundant life and loving service' as he delivered the sermon at her state funeral, adding: 'She was joyful, present to so many, touching a multitude of lives.' 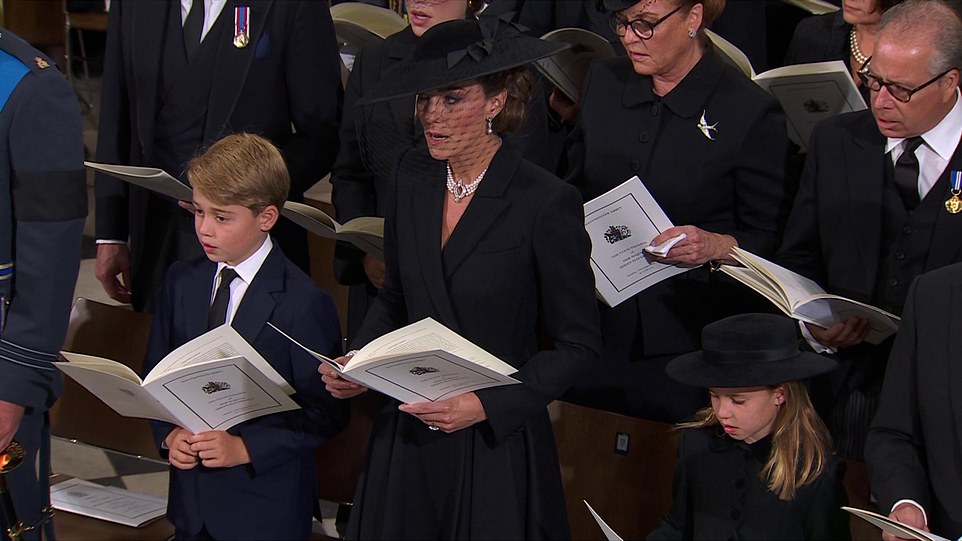 State trumpeters from the Household Cavalry sounded the Last Post following the Archbishop of Canterbury's commendation over the Queen's coffin and a blessing pronounced by the Dean of Westminster. Two minute's silence followed across the country before Reveille was sounded by the trumpeters before the National Anthem was sung by the congregation. 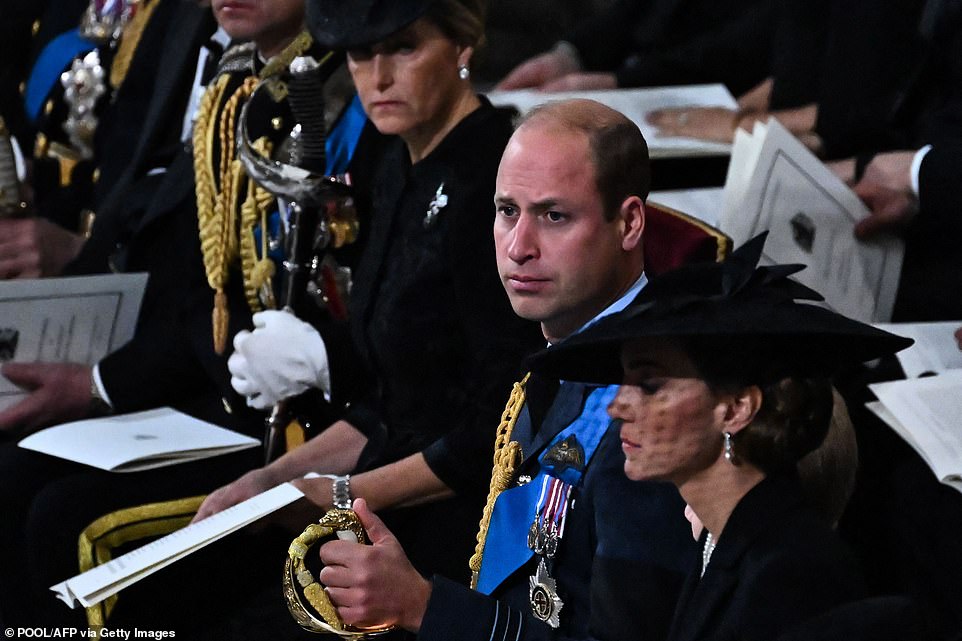 King Charles III looked tearful at points of the service while his sister Princess Anne looked at him with concern and care before fixing her own stare on her mother's coffin and crown. Prince Andrew looked moved - having been fighting back tears as the family marched behind the Queen's coffin through Parliament Square. 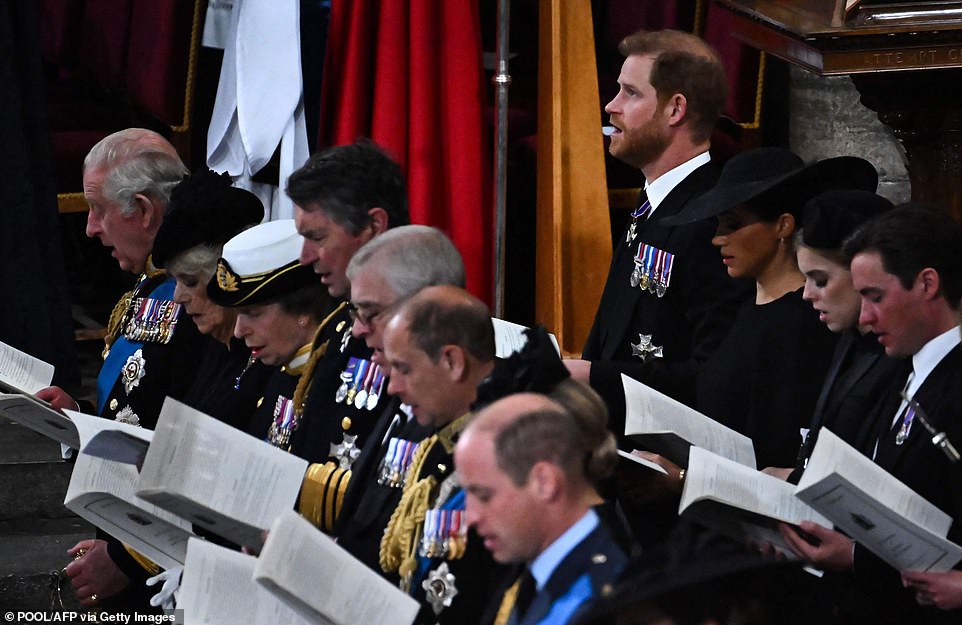 The monarch sat at the head of the family next to Princess Anne, with the Duke and Duchess of Sussex behind him in the second row, after more than a week leading the monarchy and the nation in mourning his mother the Queen. 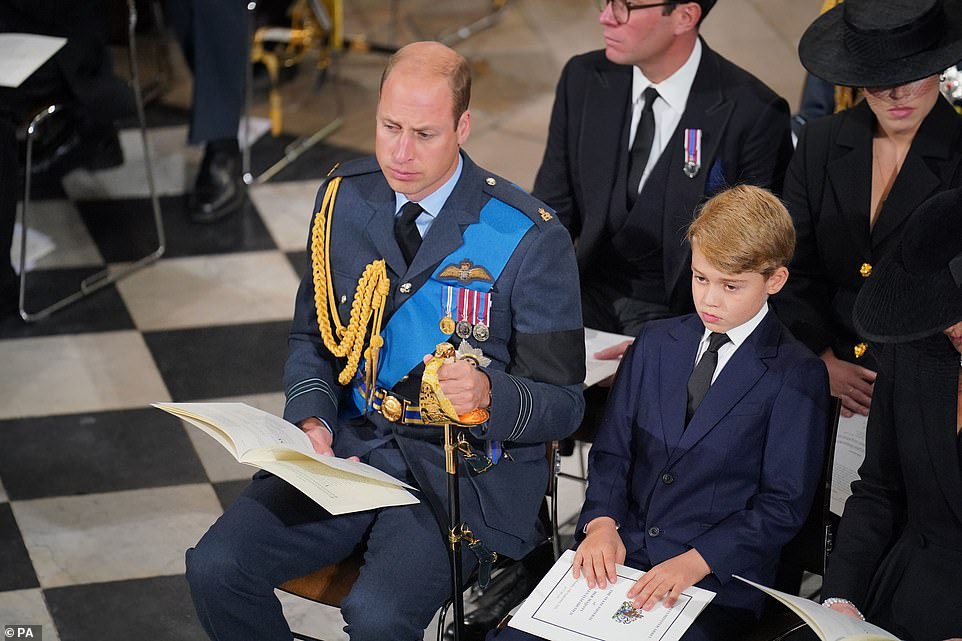 Prince William, who marched with his brother behind the coffin, was on the front row next to Prince George, who was reading the order of service during the Archbishop of Canterbury's sermon, before singing hymns, while Princess Charlotte was seen whispering to her mother, who with William decided to bring them to say goodbye to their great-grandmother. 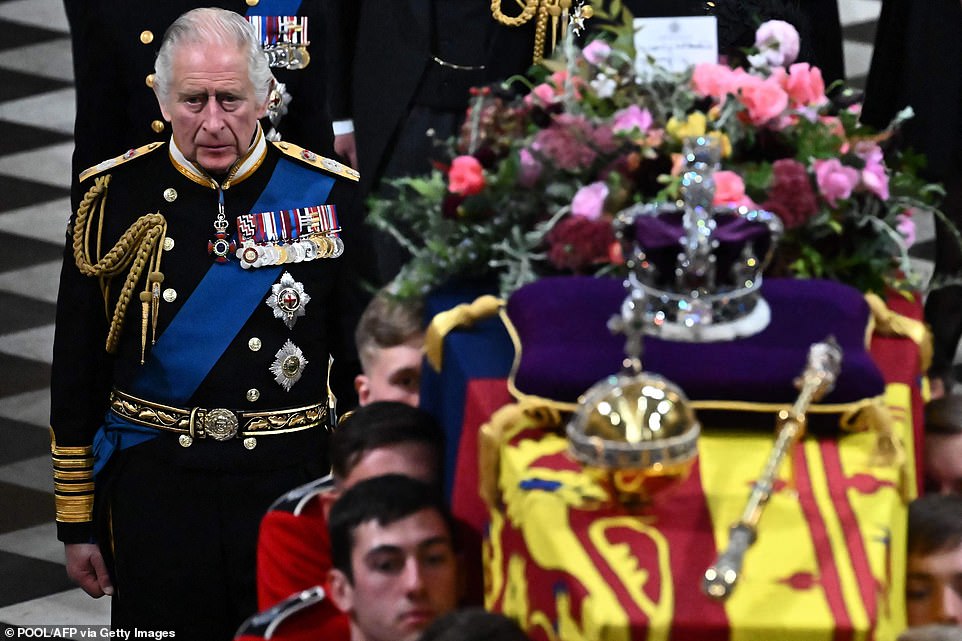 The King looked very emotional during the singing of the national anthem at Westminster Abbey. Charles remained silent during the song, while his siblings and members of the royal family sang along. Gripping his ceremonial sword, Charles looked downcast as he started straight ahead while a piper played Sleep, Dearie, Sleep. 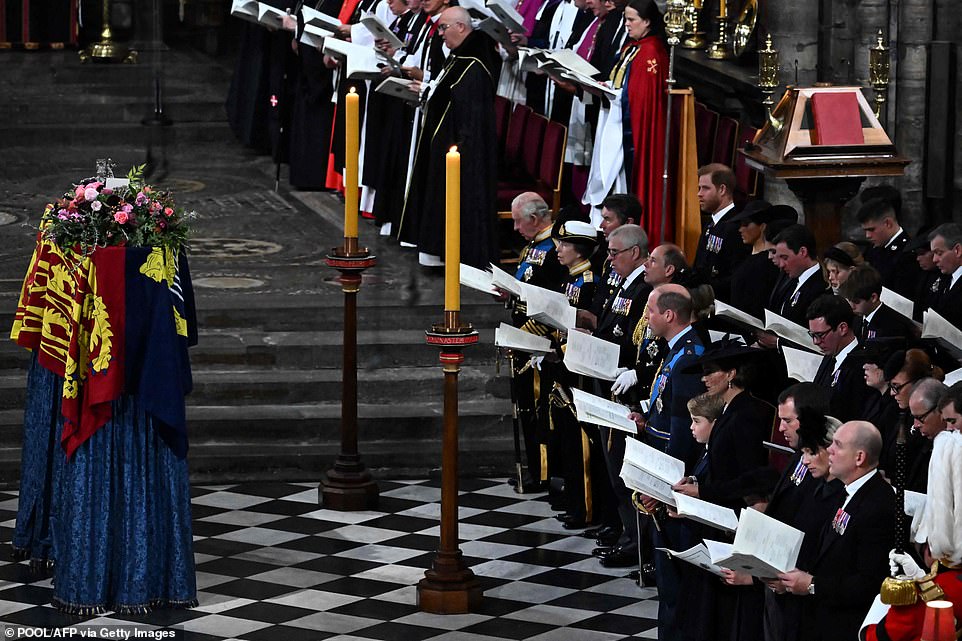 The UK's most important church, packed with 2,000 VIPs including prime ministers, presidents and the Queen's family, was serene aside from the sound of hymns and prayers in a funeral service Her Majesty has curated herself before she died. 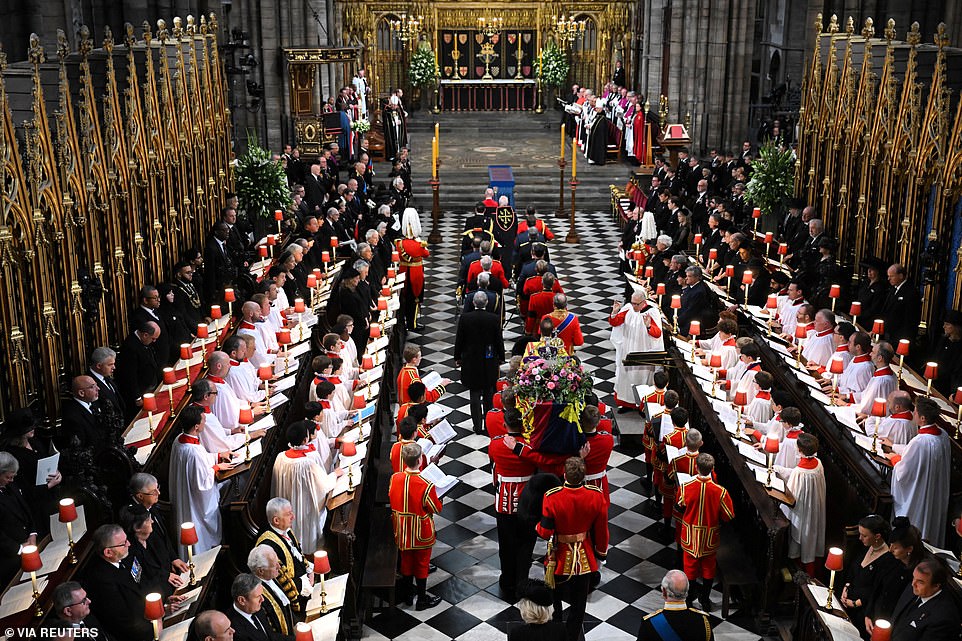 On an highly emotional occasion for Britain and the world, the Queen was carried in her oak coffin to the gun carriage used by her parents and was followed through Parliament Square by her son, the King, and her relatives including the Prince of Wales and Duke of Sussex. Andrew, the Duke of York, appeared to be crying. Outside the Abbey an estimated 2million people are in central London along procession routes and watching on big screens.